Freddy ran home as fast as his legs could carry him.

Breathless, he crashed through the flimsy door of the shack they lived in. His father looked up. Freddy pointed at his weathered, antique Cloudspotting book.

‘What are you going on about?’

His father paused. Then he bolted from his chair and pushed passed Freddy. Outside he scanned the dark sky, filled with the familiar black pollution. It had been years since the dirt, soot and gases had caused the clouds to darken permanently, forcing life to the brink of extinction.

He spun round and saw it, spiralling, towering upwards and at its peak, a glimpse of pure blue sky.

Freddy watched his father do a bizarre dance of delight before falling to his knees, sobbing with joy.

‘Don’t you see what this means, Freddy?’

Freddy blinked at his father.

‘That I can finally tick off the first one in my book,’ he gestured to the crumpled old pages in his hand.

His father laughed. ‘Yes, Freddy, you can.’ 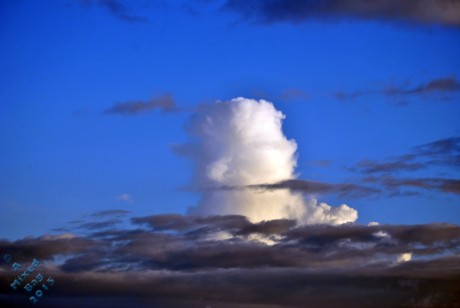 Written as part of Sunday Photo Fiction. Write a story of around 200 words based on the photo prompt given (above). For more details visit HERE.