There was no magic in what he did. The snow made it easy to track the footprints. So long as it did not snow again before nightfall, he would find his prey.

The creek had not frozen over yet, the bubbling water still trickled through the land on it’s journey to join the mighty Yukon. The running water was the only sound apart from the crunch of his steps.

He followed the paw prints away from the creek, up into the bare trees of the surrounding forest. The sun had begun to drop behind the branches. Soon he would have to find shelter for the night.

A flurry of wings broke the serene atmosphere, a loud squawk and a dusting of snow fell on him, knocked from a branch above. He looked up and saw the Raven. Unlike his Hän ancestors, he could not take seriously the mystical stories handed down to him. The coal black spiritual trickster hopped on the branch, an inquisitive eye looking at the young warrior. In return he raised his small axe and shouted. The Raven took flight.

He found the tracks once more but a few paces later they abruptly stopped as though the animal had disappeared into thin air. He looked around the darkening woods. Dusk changed the landscape, new shadows and dark spaces appeared. The sound of the creek grew fainter, the stillness intensified. He could sense the eyes watching him.

From behind a tree the yellow eyes appeared. The wolf crouched and growled. He mirrored his prey, his axe ready to strike. It was not personal. The wolf understood this. He had to eat to survive the Yukon winter. An adult wolf would nourish him for a week.

The second growl came from behind him. He spun around. It couldn’t be. The second wolf padded towards him with menace. Then a third materialised to his side, and a fourth.

Breath crystalised from their mouths as they circled him, the cold steam adding a cloaking mist to their shadowy presence. He wished he could believe in his ancestors spirit world now. It was too late to change. The first wolf pounced. He swung the axe and felt it sink into the flesh. Then he felt the sharp teeth clamp around the back of his neck, another set dug into his thigh. Red blotches

Above, the Raven flew into the night sky. 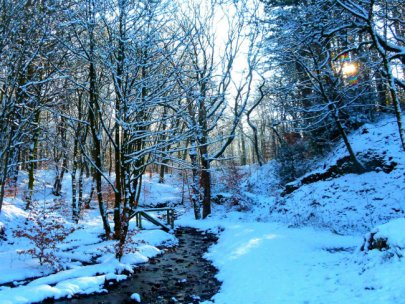 This is a response to the Thursday Photo Prompt – Magic curated over at Sue Vincent’s Daily Echo. Click on the link to read other stories inspired by the image.