‘You’re sure this is the right place?’ Norman looked at the grey concrete  structure. ‘It’s just so very, well, ordinary.’

‘What were you expecting?’ the sprite asked.

‘Perhaps a swirling vortex of doom, or an army of raging demons. At the very least a ferryman with a boat.’

‘You read too much fiction,’ the sprite replied, ‘at least that explains the costume.’

Norman looked down at the shining armour suit he had ‘borrowed’ from Roger, his friend who was secretary of the Charlton Historical Society. The metal visor fell over his eyes again.

‘Come on.’ The sprite led Norman into the multi-storey car park. Passing shoppers stared at the knight, fumbling with a large sword, clunking down to the basement level.

Fred, the car park attendant, was dosing in front of the security monitors when the sound of metal walking stirred him. Norman appeared at the door.

‘Excuse me, is this the entrance to the Underworld?’

Fred sighed, ‘You’re the fifth one today.’ He pressed the buzzer. ‘Straight through the door.’

Norman nodded, a determined look on his face. He was ready to slay the Devil to save the world, and hopefully be home in time for mother putting tea out.

He stepped through the door. 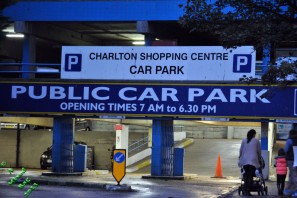 28 thoughts on “THE GATES OF HELL (via CHARLTON)”