Dr.  Henry Folkestone watched as Abubakar put down his instruments and looked back at the expedition leader.

Together the put their shoulders against the huge rectangular boulder and heaved. Gradually the ancient stone moved, the sandstone scraped along the floor. Dust and dirt swirled in the fetid air.

This was the moment Henry had been working towards for years. The tomb of the great Egyptian Pharaoh Hatshepsut lay beyond this door, buried with her jewels and gold. The British Museum of Ancient History would claim the majority of the discovery. The fame that would come with the discovery was enough for him.

Finally they made a gap big enough for Henry to fit through. He took the flaming torch and stepped through. Flickering orange light fell on the dark tomb for the first time in centuries. It illuminated cobwebs, old wooden bowls and spoons. He jumped at the skeleton in the corner, the empty black eye sockets staring at him, a gaping mouth mocking him.

Deeper inside the pyramid a golden casket shuddered. The restless spirit of Hatshepsut lay trapped still, waiting for the day she could unleash her power over the Earth once more and take her revenge. 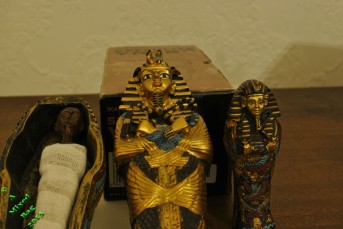