He chose the discount store for the increased footfall. In these times of austerity people were desperate to make savings.

Each day he sat outside. The life preserver drew some odd looks, but he wanted to attract attention.

‘A flood is coming to wash away all our sins.’ Okay, he was exaggerating a bit with that one, but the sea levels were rising. The local river had burst its banks for the last three years in a row.

As well as odd looks he got the abusive comments and the laughter he expected. No one seemed to want to listen to his message.

‘The End of The World is Nigh.’ It seemed plain enough to him: the nuclear threat, climate change, overpopulation, species extinction, but still there was no real change in the people who walked passed him.

When the young gentleman threw the apple core at him on a dare from his friends, he decided he’d had enough. They either weren’t interested in saving themselves or were resigned to their fate.

The archangel packed up his seat and trudged off. How would he convince his boss that no one wanted to listen anymore? 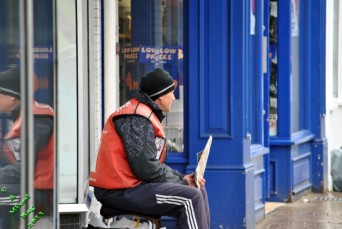 35 thoughts on “THE END OF THE WORLD IS NIGH”