The kid moved his white pawn to e4, Eddie matched him, moving his black pawn to e5. White King’s knight to f3. Black Queen’s knight to c6. Eddie sat back. He was on comfortable ground playing the King’s knight opening. He didn’t want to beat the kid too quickly; he would play along for a bit.

Among the commuters and tourists in Union Square, the rows of fold-up tables sat, each with chess games at various stages. Eddie had been coming here for over a month now, since he’d lost his job. Soon he’d have to find work to pay the bills. Eventually he would have to tell his wife.

The young boy leaned forward. He moved his pawn to g3.

‘The Konstantinopolsky Opening,’ the boy said. ‘You know it?’

Eddie blinked. Five minutes later it was all over. The boy called ‘checkmate’ and Eddie’s King fell. The boy’s mother took his hand and led him off.

The next day Eddie passed by the chess tables and headed into the Union Square Job Center. 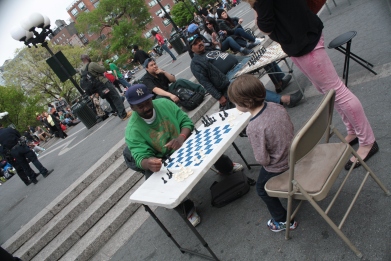 Written as part of Flash Fiction for Aspiring Writers. The challenge is to write a flash fiction story, in around 150 words based on the weekly photo prompt. For more information visit HERE.

To read other stories based on this week’s prompt, visit HERE.