I cornered Sheila next to her cheap display cabinet in the living room, noticing that she hadn’t bothered to hide her tacky glass ornaments despite hosting the annual neighbourhood fireworks party.

‘Exactly when did it change from being a fancy dress party?’ I asked her, raising an eyebrow to indicate the ridiculous small witches’ hat that still adorned my head.

‘I don’t think it ever was supposed to be a fancy dress party,’ Sheila replied in her irritating meek manner, hands clasped in front of her like she was praying for forgiveness.

‘My invitation clearly said it was to be a fancy dress night.’

‘I didn’t do the invitations. I was just in charge of nibbles.’

‘Well, who did do the invitations?’

Sheila paused and her eyes briefly met mine before darting away. Then it dawned on me.

‘It was her, wasn’t it?’ I pointed upstairs, where I knew Linda to be. Sheila bobbed her head and made her escape, darting into the kitchen.

That bitch, I thought. I turned and saw Gordon dancing in the middle of the living room. It was difficult to miss him – a six-foot parrot dancing among our neighbours, who were happily laughing at his expense.

I strode through the small crowd gathered around him and grabbed his wing.

‘Come on, Gordon, we’re leaving.’ I dragged him away, his flapping costume knocking a couple of bystanders’ drinks from the hands. At the living room door I walked straight into Linda.

‘Leaving so soon, Henrietta?’ she asked, with a triumphant grin on her face. ‘Gordon was just telling me how much he was enjoying the night, despite the little mix-up with your invitation.’

‘Yes, I was…’ Gordon stopped as I glowered at him before turning back to Linda.

‘A mix-up was it, Linda? How convenient that you only made the mistake with our invite.’

‘Yes, odd that, isn’t it? I do apologise.’ The smug smile didn’t waver from her face. I pushed passed her, dragging Gordon behind me.

‘Really, dear, I’m sure it was an innocent error. Besides, we became the talk of the party in our costumes.’ Gordon protested once we were outside.

‘Honestly, Gordon, do be quiet.’ I snapped. I had tried my best to welcome Linda into our community, but she was about to find out the price of trying to upset the established order of our little society. 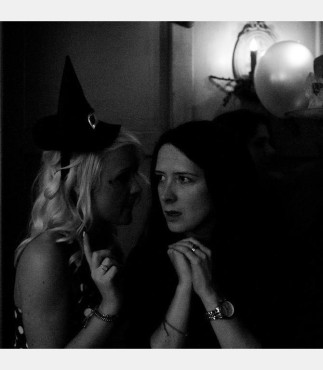 Written for a writing course I am currently sitting. The assignment was to write a short story based on the photo above, specifically about the character of the blond woman.