Titus Valerius looked out over the grey water of the Adriatic Sea. The view was as bleak as his prospects. It had been a year since he had seen Rome and his beloved Domitilla.

When he had joined the army he had dreamed of travelling the world, amassing victories and returning home triumphant. With the Roman Gods on his side he could have retired a well-rewarded legionnaire. With money rewarded he could afford to overlook Domitilla’s poor background and lack of a dowry.

Then Caesar had invaded Rome. Valerius’ misfortune was to have been stationed in the capital at that moment. Pompey fled to Greece, taking with him all the legions he could muster and leaving Rome to the invaders.

Months passed in Greece while the politicians argued and postured. Then Caesar crossed the sea to confront Pompey. The Roman Civil War had begun.

And now here they were camped around Dyrrhachium with no sign of an end to the siege. Caesar surrounded them on land, his fortified wall sealing them in to their coastal haven. Pompey’s advantage was having the sea at his back and a supply route for his ships. The battle was one of attrition. Neither of the great imperators showed any sign of blinking.

The sun began to set over the dull sea. Soon Aquila would arrive to take over the lookout for the night. Valerius had only his ration of bread and a hard bed to look forward to.

He heard a footstep outside, someone scrambling on the rocky outcrop. At first he thought Aquila had arrived drunk for duty again, but when he looked through the gloom he saw there were two men.

‘Halt!’ he cried, raising his spear and leaving his small lookout hut. ‘Who goes there?’

The two startled men threw their hands up in the air. ‘We wish to see Pompey,’ the taller of the two spoke. Valerius recognised the language as Gaulish, of which he had a smattering from serving in Caesar’s campaigns in that godforsaken land.

‘Where have you come from?’ Valerius asked.

‘We have escaped from Caesar’s army. We have information that could help Pompey.’

‘We know of a weakness in Caesar’s fortifications which could be exploited.’

Aquila came into view marching across the promontory. He saw Valerius with his spear raised, holding the two men in front of him.

‘Take over the lookout Aquila, I must take these men to see the imperator at once.’ If what the men said was true, his future may not be so bleak after all. Pompey would reward greatly the man who brought him information that could turn the tide in favour of the Republic. 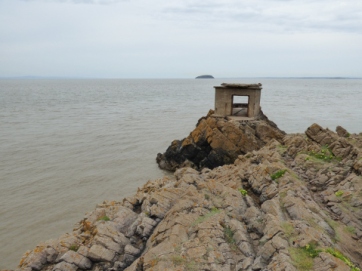 This is a response to the Thursday Photo Prompt – Bleak curated over at Sue Vincent’s Daily Echo. Click on the link to read other stories inspired by the image.

For background on the Battle of Dyrrhachium, it’s place in the Roman Civil War that ultimately saw the end of the Republic, and the significance of the two Gallic informants, visit here: Wikipedia.

13 thoughts on “PRELUDE TO BATTLE”