She stood at the window looking out at the harbour.

They’d lost her Molly once before when she wandered off into the woods and didn’t return. She was found the next day in her bivouac of branches and leaves. Molly laughed at her parents’ worrying, ‘I’ll always come home,’ she smiled.

If only she had stopped her. But she could never say no to Molly, never bring herself to restrain that natural joy of life, that spirit of adventure.

Now she had lost her husband, her looks, her job. She refused to lose her Molly.

The traditional lighthouse at the end of the sea wall had gone, replaced by a metal abomination. Around their small house modern hotels crowded in. The cargo ships grew larger every year.

Still she waited and each time a sail appeared her heart would beat a little faster. Each time another little part of her crumbled.

They had never found any wreckage of Molly’s boat.

A small sailboat rounded the wall, tacking against the breeze. Her Molly would come home one day. She had promised she always would. 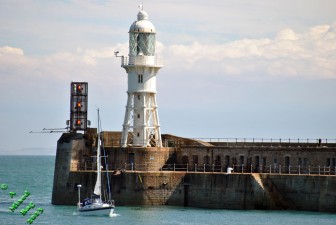