A IS FOR AARHUS, DENMARK

A STORY OF ACCEPTANCE IN AARHUS, DENMARK

He eased the lever by his leg and felt the huge crane swivel round. One more crate to be loaded and the massive container ship would be ready to depart in the morning, destined for Shanghai.

The green light flashed on the dashboard and he began lowering slowly until he heard the satisfying ‘clunk’ of metal nestling on the stack of containers. Below, he saw the stevedores securing chains around it.

Half an hour later, Malthe joined the others in the bar. Every Friday night for as long as he could remember the dock workers in Aarhus had gathered here to drink, argue, fight and make up. His father had been a regular, his grandfather before him.

‘What does the Union think about it?’ Elias was asking Malthe. ‘The port gets busier, more jobs created and they all go to the Turks, the Lebanese, the Syrians, the Somalians. They should be protected for us.’

‘You know what I mean. The Danish. They are our jobs.’

‘So long as the port is busy and the ships come here, all of our jobs are safe. There is enough work for everyone. Danish, Somali, Turks alike.’

‘They drive wages down for us all, willing to work for peanuts,’ Elias continued. He knew he had the backing of most of the dock workers surrounding them in the bar.

‘There is no evidence to support that. Do not believe everything the press writes.’

‘Bah,’ Elias sighed and turned away.

Malthe finished his Hof lager and put his empty glass on the bar. ‘Goodnight gentleman. Until Monday morning.’ He was aware of the grumbles and looks directed towards his back as he left. He had grown used to them.

Outside, the air breeze from the Kattegat Sea refreshed him after the musty bar. He walked along the docks and out to the main road, then followed the coast north. An hour later he reached his home. The bright lights and sounds of the night blew up from the city below.

He walked quietly up the stairs and undressed in the dark. He slipped into bed and nestled into Aamino’s curved back. She stirred but didn’t wake. She took his arm and folded it over her stomach. In the moonlight, Malthe marvelled at his pale Scandinavian skin contrasted against her dark African hue.

He fell into a light sleep. It had taken years for Aamino to remain undisturbed through a full night. The nightmares, the screams, the sweating, all had gradually abated.

She rolled over onto her back with a small grunt of discomfort. Malthe adjusted his position, his hand still covered her midriff. Gently, he rubbed her soft skin and waited to feel the life growing inside of her respond. 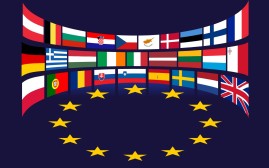 Each day in April we will visit a different town or city in the European Union, whose name will begin with the letter of the day – today it’s the port city of Aarhus in Denmark – for a story based on a theme also corresponding to the same letter.

For a full list of stories and the places visited, visit here: THE A TO Z CHALLENGE 2018.