It’s a week to celebrate books, reading and literacy. Schools are heavily involved, local councils and libraries run a series of special events. The whole thing is run by the Scottish Book Trust, a national charity ‘that believes books, reading and writing have the power to change lives.’

The big name authors and bestsellers dominate of course, with invitations to appear at talks, book giveaways and promotions, but it’s also a chance for other Scottish writers to promote their work. So if you need a reason to give my novels a shot, this week is the perfect opportunity!

Both ‘A Justified State’ and ‘State Of Denial’ are set in an imagined future country, which is only ever named as ‘The State’ in the novels. Those from Scotland will recognise the geography and some of the places immediately. Being born and bred in Glasgow, I borrowed the locations I knew to create the world of the novels.

I hope you’ll give them a look by following the links below. Both are available in paperback and on Kindle around the world (free to those with Kindle Unlimited), plus they would also make a prefect Christmas gift! 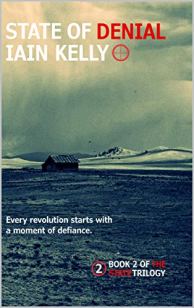