‘Yer gonna be late,’ his ma shouted at him from the kitchen.

‘It’s too late fer that, son,’ she replied, ‘about fifteen years too late.’

She didn’t understand, this was the night he would ask Justine. He should have done it before now. He’d had five years of school together. He’d wasted two of them plucking up the courage to even talk to her.

After the summer she was leaving for university in the city. He would stay behind and start down the pit alongside his father and older brother. The chances of him ever escaping to the city were slim, so he had to ask her tonight.

He took a last look in the mirror, adjusting the stray bit of hair on his crown that always misbehaved. It would have to do.

‘You’ve nae chance,’ his brother said from the bed where he was lying reading the newspaper.

‘How wud you know?’ he asked angrily.

‘Ah’ve bin there. They wans that are aff tae the city wi’ big ambitions have got nae time fer the likes a’ us.’

As the sun went down behind the mist, he sat alone in the field and wiped away a tear.

He hated his brother for being right.

This is a response to the #writephoto Prompt: Dance curated over at Sue Vincent’s Daily Echo. Click on the link to read other stories inspired by the image. 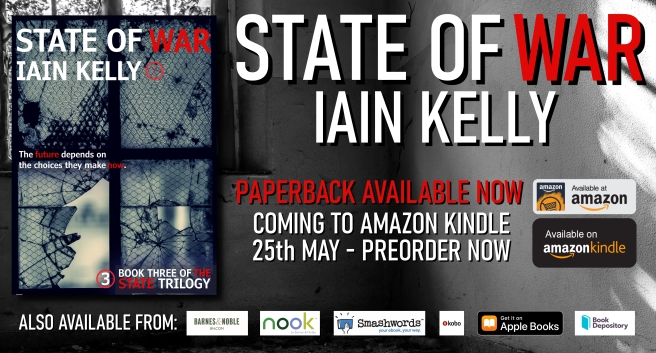 My new novel, ‘State Of War’, the final part of The State Trilogy, is out now, in paperback and available to pre-order in eBook.

You can find it to buy or pre-order by following the links below:

A JUSTIFIED STATE and STATE OF DENIAL, books one and two of the trilogy are also available. Follow the links on this page: AVAILABLE NOW

If any bloggers would like to host a guest blog about the book, please get in touch, and all reviews and shout-outs are greatly appreciated.

34 responses to “THE DANCE”