My new novel, State Of War, the third and final part of 'The State' trilogy, is on sale from today in both paperback and ebook versions. Follow the links below to check it out and pick up a copy. STATE OF WAR – PART THREE OF ‘THE STATE TRILOGY’ The State is at war at home … END_OF_DOCUMENT_TOKEN_TO_BE_REPLACED

Ahead of the release of my new novel 'State Of War' this Monday, 25th May, I'm delighted to announce that all three books in The State Trilogy are now available globally to purchase as eBooks on Google Play. You can pick them up the Google Play eBooks by following these links: A JUSTIFIED STATE    … END_OF_DOCUMENT_TOKEN_TO_BE_REPLACED

Featured on Smorgasbord Blog Magazine today – the release of the third novel in The State trilogy, ‘State of War’. Thanks to Sally as always for the post. Head over to Amazon to pre-order the book now on eBook, paperback coming soon. 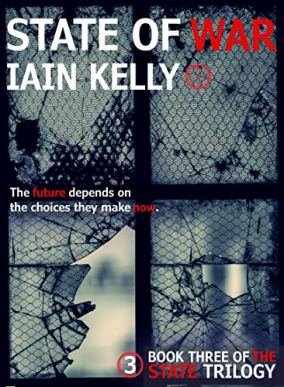 The State is at war at home and abroad. While the global First Strike War continues, a civil war threatens to bring down the ruling Central Alliance Party.

Caught between the State Forces and the rebels, hunted by both sides, they must choose between their own survival and protecting the city and the citizens trapped within the war zone.

Are they willing to sacrifice their own chance of happiness to save a city from destruction?

The thrilling conclusion to The State Trilogy sees Danny and Gabriella join forces against their enemies in a fight that will determine the fate of the State, and the lives of all those who live there.

Launch trailer for my upcoming new novel, 'State of War': https://www.youtube.com/watch?v=eYY4eR_wsnI   'State of War' is the third and final part of 'The State' trilogy, continuing the story of ex-detective Danny Samson and assassin Gabriella Marino. You can pre-order the eBook now. The paperback will be available to order soon. The State is at war … END_OF_DOCUMENT_TOKEN_TO_BE_REPLACED