A Rant About TAKEN

If I was to be topical, of course, this blog should be a review of the current Taken sequel taking vast amounts of box office money around the world, the imaginatively titled Taken 2. It’s not though, for one fundamental reason – I shan’t be going to see Taken 2 at the cinema. I may stumble across it on television late one evening four years from now, but even then I will probably choose to do something worthwhile with my time, like going to bed. 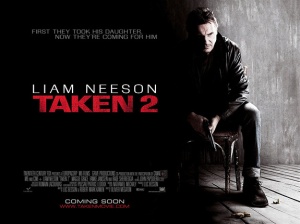 Why avoid Liam Neeson’s reprise of the his CIA agent-everyman-turned-vengeful-killing-machine surprise hit from 2008? Well, I imagine, and the reviews have told me, that it will be as awful as the original Taken.
I can hear the gasps now, the fanboys anger rising, the puzzled, unbelieving looks from the ardent Bryan (“he’s not the Messiah, he’s just got a particular set of skills”) Mills diehards. The smash hit  sleeper blockbuster, the global phenomenon, the film that stormed the US box office – awful? Surely, I must be confused. It’s this reaction that has prompted me to blog on a film that I only saw on DVD, and a sequel I will make no effort (or pay no money) to see. Because somewhere between Taken’s release in UK cinemas, where it was largely ignored by audiences and critics alike, and the arrival of this year’s sequel, the perception seems to have grown that the original film was somehow good, or at least decent, or a cult. And frankly, it isn’t. It’s rubbish.

Jump back to September 2008. Taken opens in the UK and scrapes together an opening weekend of £1.1 million, not a disaster for a European-funded action film, but not setting the world alight. The reviews aren’t overly kind, the esteemed Empire magazine, the best barometer of popular cinema, rating it 1 out of 5 with choice comments such as:
“Liam Neeson’s ill-judged presence should not cause you to even consider going within 30 feet of a fleapit that’s screening Taken”
and
“a risible male-re-empowerment fantasy set in a world where a fatal headshot and rescue from a life of inter-racial rape is the best way to win back your daughter’s heart”
and summing up neatly with
“A venomous little actioner that mistakes bile for adrenaline.”

Even the reviews that rated it slightly better, such as Total Film (3/5) commented on its “dubious racial politics,” making it “both reprehensible and enjoyable in roughly equal measure.” (I disagree with the enjoyable part of that sentence).

And so, 2008 came and went, Taken came and went and the world moved happily on to happier films. Until, that is, in early 2009, when Taken was released in America. Ah, the good old U. S. of A. We have many things to be grateful for the US for, but reviving the fortunes of Taken is decidedly not one of them. The problem was that the French film-makers behind Taken, producer-writer Luc Beeson and director Pierre Morel, premeditated and cynically produced a film designed entirely to tap into Northern America’s fear and irrational hatred of a) Europe, b) foreigners, c) travelling any further east than New York and d) Arabs. Clearly, they knew what they were tapping into, and $145 million later, an inevitable sequel was on the cards, much to the surprise of the film’s star at least, as he said recently on Good Morning America, looking overwhelmingly bored at having to promote Taken 2, when asked if he was surprised at the original film’s success: “We all were. We all were. We thought we were making this tight compact little European thriller that would do reasonably well and disappear off into DVD land“.

Yes “DVD-land.”  The place were even Seagal and Van Damme can still make a living, and the second part of Taken’s success. Once the word spread that America loved Taken, so DVD sales around the world, and especially in the UK rocketed. What were the film’s producers, distributors and backers to think but that the public were thirsty for more. And so, along came Taken 2, limping, lame and by all accounts as racist and violent as the original. And making just as much money.

But is the original Taken so bad? Well, yes. It’s not awful, it’s competently made by current standards, it’s certainly action-packed, and had it just disappeared without too much notice, I wouldn’t feel compelled to write this blog. But there are people who seem to hail Taken as some sort of pinnacle of action film making, as something fun and enjoyable, a bit of harmless escapism, and mention it alongside films such as the James Bond and Jason Bourne series. That is just plainly wrong, and deserves to be ridiculed, and so for that reason, let’s take a look at what Taken has to offer.

Right at the forefront is the racism. Quite simply, the French-Arabs in Taken are presented as uniformly evil. They are bad men. They have no motives for what they do, they are given no back story or explanation, they are just bad. And Arab. It’s the classic white American good guy against dark, middle-Eastern foreigners. No explanations are needed beyond that. Rolled into this is the stereotype of Europe as a bad place, compared to the safe haven of America. Having been to Paris, I can verify that within 2 minutes of arriving, nothing bad had happened to me. Not for Bryan Mills’ daughter, Kim though (Maggie Grace, looking decidely like a 25 year old playing a 17 year old). As Bryan feared on first hearing she was going with friends to that evil continent, filled with ‘foreigners’, having stepped out of the airport, Kim immediately meets a ‘bad man’, as Paris is full of them. We know he’s going to be bad because Bryan has told us Paris is full of bad men. It’s not a safe place apparently.  Naive Kim, though, ever the one to ignore her father’s ridiculous warnings, is soon taken hostage.

This leads to the most famous scene from the original film, the phone call. The speech Bryan gives to the hostage taker has been lauded, repeated, put on t-shirts and posters and generally thought wonderful by people who somehow mistake this for good screenwriting. Having found Kim hiding under the bed, her hostage taker decides to hang about and see who she was calling, so picks up her mobile phone to hear Bryan Mills, halfway around the world, say the now immortal lines:
“I don’t know who you are. I don’t know what you want. If you are looking for ransom, I can tell you I don’t have money. But what I do have are a very particular set of skills; skills I have acquired over a very long career. Skills that make me a nightmare for people like you. If you let my daughter go now, that’ll be the end of it. I will not look for you, I will not pursue you. But if you don’t, I will look for you, I will find you, and I will kill you.”
Lovely, all of which could simply be avoided by our evil French-Arab-baddy just hanging up the phone. But no, he waits patiently at the scene of his crime doing some very dramatic heavy breathing, just so Bryan knows he’s not talking to thin air. For some reason, the kidnapper doesn’t let out a smirk at the sheer nonsense of someone half the world away wittering on about his CV of mass murdering skills, not realising the sheer loonisy of our man Bryan being so certain of his ‘skills’. How Bryan thinks this sort of threatening will help Kim, only Bryan knows.

And so, Bryan drops everything and charges off to evil Paris and starts on his one man genocide. As pointed out by others, given he’s ex-CIA, and has numerous contacts around the globe, he decides the best course of action is to set off on his own to evil Paris. If a job’s worth doing, it’s worth doing alone. The randomness and callousness of the violence that ensues is simply astonishing, and that any audience should champion a man who so randomly kills is quite staggering – not even made justifiable by all his victims being evil-French-Arab baddies. The nadir is Bryan’s interrogation techniques. When questioning an evil-bad-Arab-man he shoots dead, in cold blood, the man’s wife. A complete innocent. This is nothing short of murder. It is disgusting, and at the same time hilariously funny, as the misguided Bryan seems to think this will encourage our hapless baddie to talk. Which, of course, it does. Only in the world of Taken would this behaviour a) work and b) be an acceptable act by our ‘hero’.

It is all justified, of course, because Kim has been sold into prostitution, drugged and raped by the evil-bad-men of Europe. Only in action cinema, a world made possible by years of mindless Hollywood actioners, can the happy ending be that Mr. Mills, by now the murderer of over 50 people, rescues his daughter, who is, of course grateful, and never going to ignore her father’s advice ever again, once she’s shrugged off the scars of kidnap, torture, rape and drug addiction. Nothing like that sort of experience and rescue to bring a father and daughter together after their strained relationship at the start of the film – now Bryan will know what birthday present to buy Kim next year. American family bonding at it’s finest.

Part of the ‘fun’ of Taken is seeing an Oscar-nominated actor of the stature of Liam Neeson stuck at the heart of this mess. It endows the character of Bryan with a certain stature, integrity, and a strange American accent that veers into Irish every so often.  This is Oskar Schindler,  a star of Scorsese films, Rob Roy, Ra’s Al Ghul in Nolan’s Batman trilogy. Since he looked mind numbingly bored through all of Taken, it has revived his career to establish him as a late-blooming action star, meaning he has been able to go on and star in such clangers as Battleship, Clash and Wrath of The Titans and Taken 2. Clearly then, not a man too fussed about the quality of the script anymore, and happy to take the money over any sort of integrity. And who can blame him? If people are actually going to pay to watch this rubbish, why not? Everyone of the awful films he stars in seems to break some sort of box office record, which, ultimately, says more about the movie going public of America and the UK than it does about anyone else in this whole sorry mess. With Taken 2, Neeson even looks bored promoting the monster he’s created. He can’t even be bothered to stand up for the film’s poster. He looks a man who knows what he is doing is wrong.  And (having only seen the trailer, not the film) why does he let his family stay in evil Europe again? Haven’t they learned about the evil-bad-foriegners?

Taken is a bad film, Taken 2 is by all accounts worse.  Mysteriously in Empire magazine it gets one star more than it’s predecessor despite being surmised as “The first one offered the novel sight of Oskar Schindler going Commando. Unfortunately, this half-hearted sequel is low on novelty and lower on fun.” Always one to bow to whatever its’ readers tell it to do, Empire seems to have reneged on its earlier criticism and decided, like the people of America, that there was something good about the original Taken. Well, there wasn’t, and there still isn’t. It was as bad as they said it was the first time.

3 responses to “A Rant About TAKEN”