A wander through sleet and snow conditions to the local multiplex on a Friday afternoon to take in Doug Liman’s latest Fair Game, starring Naomi Watts and Sean Penn. 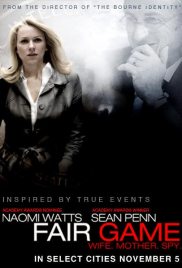 Based on the true life unmasking of CIA agent Valerie Plame (Watts) in the US press by the US government, as they tried to discredit her husband Joe Wilson (Penn) for speaking out about the lies which led to the Iraq war, this starts as a straight political spy thriller before morphing into political family drama as the unfolding events put strain on their marriage.  While some of the early momentum and intrigue is lost in this transition, the story, and the real life events it retells are dramatic enough to sustain and hold interest throughout.  The incident, though not widely known in the UK, is one of the most galling and terrifying in the series of outrageous lies and misjudgments constructed to convince the Western public that an invasion of Iraq was both justified and necessary.  That the government would sacrifice one of its own, and the agents, sources and operations she ran, in order to discredit her husband reveals the depths of desperation willingly plumbed to ensure the war.

Both Watts and Penn serve their real life counterparts well.  Watts in particular subtly displays the emotions and contradictions of a woman determined to hold her silence rather than speak out against a government which has destroyed her career and identity, until she is pushed too far.  Penn brings with him a background of political activism that, at points, threatens to overwhelm the character of Wilson, like we were watching Sean Penn rather than Joe Wilson give a speech on the merits of democracy, but it is to his credit that it never completely swamps his role.

Liman’s handheld camerawork gives an edgy feel to proceedings to keep things moving along, and mercifully the editing is nicely paced.  Only a subplot about Plame’s attempts to rescue Iraqi scientists seems slightly forced, as it deviates from the taught unfolding of the Wilson-Plame conspiracy.

In summary, taught, serious, thoughtful, adult film-making, dealing with an important, global issue.  Which probably explains why, on a perfect wet afternoon for cinema, on opening day, Fair Game, was watched by myself plus a couple who seemed more intent on rustling bags throughout.  Which speaks volumes about both the public’s interest, or lack of it, in these substantial events, and more over the public’s current taste, or lack of it, in modern cinema.