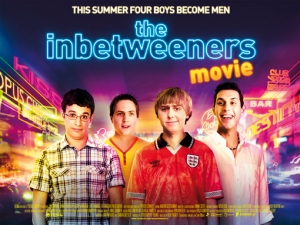 The very British cinema genre of successful television comedy going to the big screen is one littered with disasters.  Think of the poor feature-length versions of On The Buses (1971, Harry Booth), Porridge (1979, Dick Clement), Bean (1997, Mel Smith), or the nadir of them all, the deplorable Kevin & Perry Go Large (2000, Ed Bye).  So, with some trepidation comes the latest in this particular subgenre – The Inbetweeners Movie (2011, Ben Palmer).

Running on E4 over 3 series and 18 episodes, The Inbetweeners became a cult hit before finding a wider audience.  It followed the lives of four friends as they made their way through English public comprehensive school, navigating, usually disastrously, the trials and tribulations of male adolescence. The centre of the story is Will (Simon Bird), brought up in a private school and dumped in public school after his parents divorce.  there he befriends Simon (Joe Thomas), Jay (James Buckley) and Neil (Blake Harrison).  The shows blend of inventive dialogue, grose humour and knowing recreation of British school life managed to both provide laugh out loud moments along with clever, subtler touches of emotion about adolescence.  What made the comedy stand out from many similar is the focus on the unpopular kids in the school, the hapless rather than the cool kids.

Rumours of two feature length episodes to complete the story being made for television evolved into a cinematic film release.  Here, the last day of school complete, the four lads set off for Crete on a last summer holiday together, in search of sand, sun, sea and sex. So far, so Kevin and Perry, but fortunately, The Inbetweeners has enough smarts to fare much better on the big screen.

For a start, the writers have had the sense to stick with what worked in the television series. Will’s voice over opens the film, and as with the television episodes, much of the humour comes from his deadpan, exasperated commentary, which helps to make some of the groser moments more palatable. By taking the action abroad, director Palmer, and writers Iain Morris and Damon Beesley, have an opportunity to open up the television setting and they manage to do so reasonably successfully, while still maintaining the cosy feel of the TV series.  There are some hilarious set pieces that are gut-wrenchingly funny, and in the best tradition of the series, cringingly embarrassing.  Look out for an extension of Neil’s previously known dance moves, Jay’s battle with a small boy at a hotel swimming pool and Simon’s naive attempts to win back his ex-girlfriend’s attention.  There are the smattering of groser moments that some could live without, but they are in the trademark tradition of the show.

The positives could also be seen as negatives. By sticking to what worked for television, there is a sense of watching an extended episode, rather than something that necessarily belongs in a cinema.  Some of the problems of carrying on a serial to make a feature are brushed under the carpet. So, at the end of series 3 on television, Simon was all set to move to Wales and had said goodbye to his friends. That gets brushed away in one line of dialogue by Simon simply saying he didn’t have to move in the end.  The narrative is also extremely predictable, as the four lads go through various fights and courting mishaps, it’s clear from early on when they meet a group of four girls that they will eventually end up pairing off.  But the joy with a television to cinema adaption is spending time with familiar characters and The Inbetweeners does this well.  Each character, including the minor characters from the show, get their moments in the spotlight.  It’a a fitting finale to the programme.

None of the negatives  will matter to fans of the show, and there is enough humour to satisfy any newcomers too.  When a British made movie opens at the top of the weekend box office and sets a new record for any British comedy’s opening weekend box office earnings, taking over £13 million – on a budget of about £3.5 million – it is something to be celebrated.  One can only hope that the talent behind The Inbetweeners Movie are allowed to explore new avenues now, and there is no hastily cobbled together sequel to cash in on this film’s success – Mutiny On The Buses (1972, Harry Booth) or Mr Bean’s Holiday (2007, Steve Bendelack) anyone?.