Spoof movies are a difficult thing to get right, and even more so when a successful first movie gives rise to a sequel or two.  For every Austin Powers: International Man of Mystery, Naked Gun and Hot Shots! there is an Austin Powers: Goldmember, Naked Gun 33 1/3 and a Hot Shots: Part Deux!.  There is a definite law of diminishing returns by trying to string out the joke for too long.  In recent years the Movie spoof franchise (Scary Movie, Epic Movie, Date Movie) and similar affairs like Meet the Spartans are so crass, poorly written, woefully acted and badly shot, that it has become difficult to know who the joke is on – the targets of their (awful) jibes, or the public who spend money going to see this garbage.  These films, successful at the box office as they are, have come to represent everything that is wrong with Hollywood today – quick profit from lowest common denominator rubbish.  It is left then to the French, as it so often is when it comes to cinema, to remind us how something can be done properly – step forward OSS 117: Cairo, Nest of Spies (2006).

From beginning (a pastiche of black and white war movies) to end, Cairo is an absolute treat.  Based on the original novels by Jean Bruce, but owing more to the straight film spin offs of the ’60’s and ’70’s, the film follows secret agent Hubert Bonisseur de La Bath, alias OSS 117 (Jean Dujardin) as he blunders his way around Cairo, ostensively investigating the disappearance of his wartime comrade (Philippe Lefebvre).  The style of the era, and particularly the spy films of the time are both celebrated and parodied to great effect, from the direction of Michel Hazanavicius, to the  cinematography (you sometimes forget you are watching a film made in this century instead of the last),  to the costume, hair and make up and the special effects.  In the lead role Dujardin is perfectly cast and delivers a winning performance.  It helps that when dressed in tuxedo, striking poses as he pursues villains, or wooing the leading lady, he looks like a genuine ’60’s leading man, remarkable similar to Sean Connery or George Lazenby in the ’60’s Bond films.  But he is equally adept with the silliness required and extracts laughter from simple looks and reactions.

Nods to the era such as deliberately ‘bad’ back projection while in cars, disfigured villains and national stereotypes abound, all played with relaxed charm.  Running gags about each countries Secret Service cover, including de La Bath’s determined efforts to improve his companies poultry trade, are funny, and at the same time ring true enough that they are not so far fetched as one might imagine.  And, as with the best spoof and comedy films, there is room for some topical humour, from generalisations and mistaken assumptions about Islam, to ridicule of the West’s interference in Middle Eastern affairs, and the assumption that these people need the West’s help.  A willing cast join in, particularly Berenice Bejo as the leading lady, but the star is Dujardin, who balances a character of questionable morals and intelligence, with an innocence and charm that leave you laughing both with and at him simultaneously. 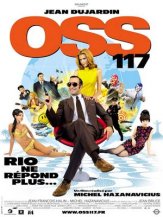 Three years on and we have OSS 117 – Lost in Rio (2009).  Does the rule of diminishing returns apply?  Well, unfortunately so, but all is not lost.  Cairo is such a perfect spoof that it was always going to be difficult to achieve the same success a second time round.  As with other spoof franchises some of the cuteness and cleverness of the original is replaced by coarseness.  While the style of the era is once again perfectly captured, a reliance on split screen editing effects interferes during the first half of the film particularly, and touches that seemed fresh in the original (posed running shots; ‘bad’ back projection) are repeated, but lack the originality of the first film.

All is not lost though.  Dujardin once again delivers a charming yet ignorant hero, and some running gags are winners, particularly OSS 117’s irritation at the mispronunciation of his agent identity, again harking to his more famous British counterpart (It’s one hundred and seventeen, not double one seven).  There’s enough here to make me think they could get another reasonable quality sequel, and it would be a pleasure to watch Jean Dujardin as OSS 117 again, even with weaker material, but then, perhaps it is better to leave things as they are, rather than sullying their reputation further (a la Austin Powers).  Besides, we’ll always have Cairo.