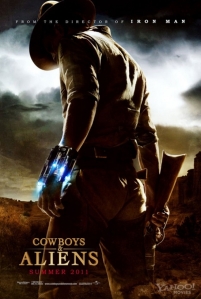 After the success of Super 8 (J.J. Abrams, 2011) at the start of the month, the summer of films has taken something of an upturn in fortune, which continues with Jon Favreau’s latest action genre mash-up, Cowboys & Aliens.  Like Super 8, Cowboys & Aliens has taken a tried and tested genre, the Western, and spiced it up by throwing in some aliens freshly arrived on Earth and snatching humans – in this case to learn about their weaknesses before colonising the planet for its resources of gold.  Also similarly to  Super 8, although working in a known genre and giving it a fresh twist, Cowboys is an original story, free of any franchise, not burdened by setting up future sequels, being based on a one-off graphic novel. It benefits from this by genuinely having some originality while having fun playing on the staples of the Western genre.  Ironically the hi-concept, B-movie premise, while providing this freshness, does also leave one wishing the studio had enough faith to make a good old-fashioned Western, but these are all too rare in modern cinema.

Part of that wish comes from the casting of Daniel Craig and Harrison Ford in the lead roles as mysterious robber, Lonergan, and grumpy rancher, Dolarhyde, respectively.  Both men are ideally suited to the look of the Western.When Craig was appointed as the new James Bond one of his critics ill-conceived complaints was that he lacked the suave, classic good looks of, say,  Roger Moore or Pierce Brosnan, and his rough, craggy looks fit perfectly with the Western landscape he finds himself in here. Ford, a ranch owner for some years, blends into the landscape as if he is part of it.  Both are decidedly man’s men, a level of toughness and masculinity that is ideal for the world of the Western, and both are excellent here. The opening twenty minutes of the film, before the aliens arrive, is set up like a classic Western. The stranger arrives in town amidst unrest and soon makes enemies of the local landowner after fighting with his son and the local sheriff.  It’s a set up that goes all the way back to Hollywood, and the Westerns, heyday, from A Fistful of Dollars (1964, Sergio Leone) through Rio Bravo (1959, Howard Hawks), High Noon (1952, Fred Zinneman) with a hint of Unforgiven (1992, Clint Eastwood) and on and on.

But times have changed since those simpler days, and so in revising a Western for the modern audience, it’s not as simple as good guy versus bad guy. In the end all the humans are basically decent, even the American Indians join forces with the settlers to unite against their common foe – the aliens.  Interestingly, despite these enlightened times, women still get a raw deal in this Western as Lonergan wife exists only in flashbacks to provide some motivation, Olivia Wilde is good, but ultimately not all that she seems, and the rest of the woman folk are simply there to be rescued by the brave posse.  Even in a Hollywood film where political correctness has taken over, the women are still the outsiders in the Western landscape.  Like the classic Westerns there is room for some great support playing – Sam Rockwell, Paul Dano and Adam Beach all get good moments.

Once the aliens arrive it all becomes a bit silly, but the cast go along with it and there are some good laughs and entertainment along the way.  The alien effects are good, but as always with the bad guys, lack any personality or depth.  There is still something exhilarating about the action scenes in Westerns, as the cowboys ride out in the vast landscape, or charge into battle, and mercifully, alongside the CGI aliens, there’s a good deal of genuine stunt work on display that links back to the simple thrill of the cowboy chase – think back to Stagecoach (1939, John Ford), but add aliens. The lack of playing to a 3D camera also helps to make for action scenes where the viewer can still determine what is going on, and it is all well handled by Favreau – as a director he is firmly established as a Hollywood A-lister now, and with statements such as ‘Westerns should be shot on film’, when asked why Cowboys & Aliens wasn’t shot digitally for 3D, seems like someone who at least has some respect for the art of film-making. Hopefully, this film marks a step away from the sorry Iron-Man 2 (2010) obligations of the past, and a chance to be allowed more original material.

Cowboys & Aliens is very much a B-movie plot dressed up in blockbuster clothing, but it has enough tough old guts to make it another success in what was fast becoming a poor summer.

One response to “COWBOYS & ALIENS”