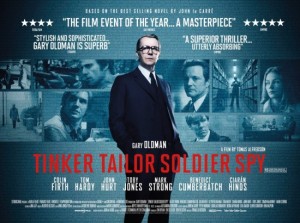 The popular truth is that the demographic of cinema-goers is made up of primarily the 16-24 years old age group, and as such, if you want to have a hit movie then you have to appeal to the sensibilities of that group.  Action, sex, comedy, celebrities to the fore; drama, literary adaptations, plot, character development, character acting take a seat at the back of the class.  Yet in its opening weekend, Tomas Alfredson’s Tinker Tailor Soldier Spy, a film epitomised by the latter list of characteristics, sat pretty at the top of the UK box office, having taken nearly £3million, more than the recently released The Change-Up (David Dobkin), Friends With Benefits (Will Gluck) and I Don’t Know How She Does It (Douglas McGrath) combined, films that fall firmly in line with the former group.

The risk, of course, in targeting a film at a more mature audience is that this audience is far more discerning.  If the film is bad, the audience will stay away, unlike the celebrities or big set piece effects that can still draw in a younger audience to a poor product.  The benefit is that if you can get it right, there is a largely untapped adult audience out there just waiting for a good reason to go to the cinema.  Make a good mature film, and the audience will come.  All this relies on huge generalisations and a prescriptive view of film-making and marketing that fundamentally reduces all teenagers to unthinking neanderthals, which is of course false.  Yet it is the model on which the film industry in both America nd the UK seems to work.  Therefore, the ideal for any film production company is to find the magic formula that combines the smart, intelligent serious film with an equal appeal to a younger age group.

With his last film, the brilliant Let The Right One In (2008), Tomas Alfredson managed to do this, combining a traditionally teen-friendly genre (the vampire movie) with an exquisitely made drama about childhood, friendship and bullying in 1980’s Sweden.  It was so successful as a foriegn language film that Hollywood felt the need to try to cash in, and gave us the awful Let Me In (2010, Matt Reeves), a film that expertly highlights the current state of un-originality and desperation for a quick buck that pervades modern Hollywood cinema.  Thankfully, the producers of Tinker Tailor Soldier Spy have found a much more rewarding way in which to bring Alfredson’s brand of film-making to the wider English-speaking public, by recruiting him to helm this superior adaptation.

Based on the modern classic novel by ex-British spy John Le Carré, Tinker Tailor tells the tale (loosely based on real life events) of the hunt for and unmasking of a Russian mole operating at the very heart of the British Secret Service at the height of the Cold War in the 1970’s.  An aging Control (John Hurt) and his loyal right hand man George Smiley (Gary Oldman) are forced out of the Service when an operation in Hungary goes badly wrong, and a new breed of ambitious, career-driven agents take over.  When another agent, Ricky Tarr (Tom Hardy), returns on the run from Europe with information that confirms what Control thought – that there is a Russian spy at the centre of the Service – the government re-enlist Smiley to unravel the mess and unmask the traitor in their midst.  Control has given a codename to each potential traitor: Tinker is Percy Alleline (Toby Jones), his replacement at the top of the organisation; Tailor, the charismatic Bill Hayden (Colin Firth); Soldier, the dogmatic Roy Bland (Ciarán Hinds); Poorman, Hungarian immigrant Toby Esterhouse (David Dencik); and Beggerman – Smiley himself.  Along with his loyal companion Peter Guillam (Benedict Cumberbatch), Smiley sets about examining the evidence and eventually makes a revelation that will shook the Service to its very core.

Wisely, the plot sticks fairly closely to the original novel and manages to cram in much of Le Carré’s intricate plotting and characterisation into its slim 127 minute running time.  Oldman, as the film’s still centre is excellent, capturing the quiet, unassuming yet ruthless Smiley, and successfully managing to step out of the long shadow of Sir Alec Guiness, who embodied Smiley in a BBC mini-series adaptation in 1979.  Other stand outs include Cumberbatch, adding another impressive performance to his growing C.V., Kathy Burke as Connie Sachs – another of the old guard forced out of the Service – reminding us again just how much of her career and talent was wasted messing about on throwaway television comedy, and Mark Strong as Jim Prideaux, whose initial shooting sets the whole plot in motion, finally getting to do something other than play a Cockney hard man or villian.  Trying to cram so much into one film does lead to some loosing out – Colin Firth’s Hayden gets short screen time to establish his flamboyant character, and similarly Ciarán Hinds gets little time to register.  The acting, from such a high quality cast, is however, uniformly brilliant.

The film-makers have made some modifications. Moving the initial shooting of Prideaux to Hungary rather than Czechoslovakia seems a rather unmotivated move, it’s only consequence to possibly add more suspicion to the Hungarian born Esterhouse. Guillam is given a new scene that explicitly reveals his homosexuality, something that is only very oblique, if at all present, in the source novel. It seems a rather pointless addition, a glimpse into a personal life that has little relevance to the central plot.  More successfully, Alfredson uses a central scene of an office Christmas party, used in flashback throughout the film, to neatly sum up individuals characteristics neatly and efficiently.  So we have Control, drunk and alone, Smiley quietly watching everyone, Hayden the extrovert and Alleline and Bland scheming at the back of the room.

Alfredson’s direction is a masterclass in composition and restraint. Much like Let The Right One In, he trusts his material to let the camera sit and watch, and use movement and changes in pace as a release from built tension and as a tool to punctuate points.  Similarly,the editing,by Dino Jonsäter,allows shots to take their time, cuts only when necessary and increases the pace when the story dictates it should.  Cinematographer Hoyte Von Hoytema paints London as a grey, dim fog enshrouded city and the interiors are all a similarly smoke-filled fug, embodying the murky world Smiley has to unravel. When the traitor is revealed, the room is noticeably well-lit and clear, as Smiley literally sees the light.

The whole thing is so well-engineered and clinical, and so much attention to detail is laboured over that it could be argued there is a coldness, or a certain coolness, to it. But this is the world the characters inhabit. The characters don’t let their personal lives enter or complicate their profession, and it is Smiley’s main flaw that his socialite wife Ann has left him, and continues to carry on very public affairs which George is fully aware of.  Again, this strand of the story is diluted down from the source novel, but this works to just hint at the human behind his cool demeanour.  He only raises his voice once throughout the film, when confronting a life long friend who has betrayed him so completely. Smiley is a man tired with the world, but struggling to maintain his own personal control within it.  When he takes his place as the new head of the Service at the end of the film, there is the hint of a smile as he takes his place where he belongs and where, conversely in the muddled world of spies, he is most in control.

The central scene in which Smiley confronts his Russian spy nemesis, Karla, is mentioned, and that enhances the possibility of filming the further two novels that make up Le Carré’s ‘Karla’ trilogy, something that on this evidence (and box office success) would be welcomed.  Tinker Tailor Soldier Spy may not please everyone – it remains to be seen if those that haven’t read the book will fully understand what is exactly going on – especially those looking for action set pieces, explosions and sex that are generally associated with the spy thriller genre, but it is difficult to imagine a more definitive or successful adaptation of this complex novel into a film.  Let’s hope other film-makers take Alfredson’s lead and have faith that the people who go to the cinema the most also like to see genuinely good films in amongst the trash.  One of the best of this, or any, year.