THE ADVENTURES OF TINTIN: THE SECRET OF THE UNICORN 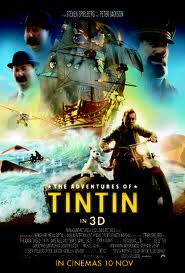 One of the nicest touches about Steven Spielberg and Peter Jackson’s big screen adaptation of the boy reporter Tintin occurs just after the opening credit sequence – itself a charming animation in its own right as it follows the distinctive silhouette of Tintin on a foot chase through Hergé’s memorable world. We are then situated in a cobbled town square, Belgian in atmosphere and feel, though never pinpointed as such. There we find an animated version of Hergé himself, the original artist and author of the Tintin adventures. He is shown drawing a street portrait of his most famous creation, given away by the presence at Tintin’s feet of his loyal companion, the dog, Snowy. When the animated Hergé completes his portrait he reveals it to the audience as a Tintin portrait in the style of the original comic book creation, while Hergé simultaneously states ‘I think I caught something of your likeness’. At the same moment, the Tintin in his present creation is revealed, as Jamie Bell turns to camera, covered in his mo-cap (motion capture) facelift. It’s a bold introduction by Spielberg, at once paying homage to the much-loved Tintin and his creator, Hergé’s distinctive comic style and the books that still entertain worldwide. It also starkly calls attention to the method Spielberg and Jackson have chosen to use to bring Tintin to life in their big screen version – the still contentious use of motion capture.

What motion capture successfully brings to The Adventures of Tintin: The Secret of the Unicorn, and which is fully utilised by Spielberg, is an animated recreation of the Tintin world. From the European town and city, to the open seas and the desert to Morocco and back, the detailed recreation of scenery, landscapes, sea battles and aeroplane thrills and spills, it’s all excitingly shot and beautifully detailed.  It is an immersive world that has been created, and done handsomely without the need for gimmicky 3D.  As always with mo-cap though, problems still exist in the representation of human characters.  Lying somewhere between human and cartoon, the ongoing issues of mo-cap are all present – the dead eyes of the characters, the oddly expressionless faces and disconcerting lip movements, the awkward body movement, a stiffness that means Tintin can’t seem to relax his arms or walk across a room without looking uneasy. During the fast paced action sequences of course, all this can be forgotten, which perhaps explains why Spielberg hardly pauses for breath once the adventure begins. In some places this onrushing of action works remarkably well, like the extended sequence of Captain Haddock (Andy Serkis) recalling the sea battle between his ancestor Sir Francis Haddock and pirates that leads to the sinking of the Unicorn ship, all of which is shown in vivid flashback. The constant mixing between present and past is seamless and the imaginative animated edits across time frames are invigorating. In other places it distorts the film into a frantic mess, like an escape from villains in a Moroccan coastal village, which is such a mass of colliding elements that any sense of tension, drama or danger is dissipated.

Unfortunately the characters who suffer the most from the bedevilment of mo-cap are the films central hero and villain – Tintin and Sakharine (Daniel Craig). Tintin, always intended as a blank face by Hergé, on which the reader can project their own image, suffers from the mistaken belief of the films creators to try the same trick. In film it just leaves us with a bland, humourless hero, lacking personality or any sense of peril or danger – feelings only enhanced by the personality-sapping effect of mo-cap.  Sakharine, meanwhile, suffers from having too little screen time and not much to do when he is on screen, apart from barking orders at his hapless crew. In all the rush to keep the action going and the younger children interested, his plot and motivation get lost and jumbled.

The weak hero and villain leave a gaping hole at the centre of the film. This gives the other players room to make an impact.  Nick Frost and Simon Pegg as detectives Thompson and Thomson raise a few laughs with limited slapstick opportunities, although one senses that if they had been featured more it would have quickly become tiresome. That leaves Andy Serkis as Captain Haddock and Snowy the stage to steal the film. Snowy, (one assumes) as a fully animated characters, doesn’t suffer the limitations of mo-cap, and therefore seems a lighter, freer spirit amongst the cast, bounding, running, jumping around with abandon. There is something slightly askew in his deep black eyes that doesn’t ring true, but not being human, it’s easier to overlook.  Serkis, regarded as the king of mo-cap ‘acting’ (see Gollum, King Kong, Rise of the Planet of the Apes, et al.). seems to get the best out of the movements required to make mo-cap convincing – perhaps purely by coming from a place of more experience. There is something odd in his choice of a thick (and wandering) Scottish brogue for the voice of Haddock, quite at odds with the neutral English adopted by the rest of the cast. Nothing in Hergé’s original stories suggests Haddock is Scottish, or of Scottish ancestry (Serkis voice for  Sir Francis Haddock seems middle-English in flashback). Perhaps more disconcertingly is the lack of proportion in the mo-cap Haddock’s head, which for some reason is clearly sized to big for his body. Incidently, in the same vein, why Tintin’s trademark quiff has become ginger as opposed to fair-haired blonde originally drawn is a mystery.

The exaggeration of features seems to have been a choice by Spielberg, giving much of the supporting cast a rather freak show look – all big jaws, bulbous noses and over-sized heads. In a cameo role, Bianca Castafiore (Kim Stengel), the opera singer, has the look of someone dressed in a rubber fat suit. All of which begs the question as to why this film was not either fully animated or live action, instead of stuck in the weird half world of mo-cap. The strength of mo-cap lies  in its use to create non-human characters in a realistic way, within the real (live action film) world (see Andy Serkis’s list of previous mo-cap incarnations). When it is applied to a film as a whole, its limitations, particularly in representing humans become all too clear. After the likes of Beowulf  (Robert Zemeckis, 2007), A Christmas Carol (Zemeckis, 2009) and the major flop of Moms Need Mars (Simon Wells 2011), it seems the studios and film-makers still are unwilling to harness mo-cap  as a tool within a film rather than as an overall style of itself.  How many more critical and public pannings will it require before the Studios understand that the audience simply do not want to look at ‘reanimated corpses’, as mo-cap’s humans are referred to? One suspects that, like the gimmick of 3D, Hollywood will continue to plough ahead regardless so long as they can make their money.

What the mo-cap medium and the emphasis on action does confer on this Tintin is a lack of overall charm that is lost from the original stories, and from previous live action Tintin films – Tintin and the Blue Oranges (Philip Condroyer, 1964) and Tintin and the Mystery of the Golden Fleece (Jean-Jacques Vierne, 1961). While these obscure, low-budget European films lack the action and scale of the Hollywood backed blockbuster that Spielberg can afford, they compensate in charm and a sense of fun, loving characterisation (benefiting from being human), and a laid back energy that Spielberg has jettisoned in favour of all out action.  John Williams tries his best to encapsulate some of that charm and feel in his European tinged score, but ultimately this feels like an American adventure film rather than a European one, and it, and Tintin himself, suffer for this.

Hergé famously said before his death that Steven Spielberg was the only director who could bring Tintin to the big screen.  Of course, he said this in the early 1980’s after the likes of E.T. the Extra-terrestrial (1982), Raiders of the Lost Ark (1981), Close Encounters of the Third Kind (1977) and Jaws (1976). If Hergé had lived long enough to see Spielberg move to more serious adult fare like Schindler’s List (1993), The Color Purple (1985) or Saving Private Ryan (1998), or to simply make some of his weaker films – Hook (1991), The Terminal (2004) or A.I. (2001)- he may have revised his statement on reflection. He certainly hadn’t seen motion capture coming, and one wonders if he would have regretted that medium’s interference.

A climactic battle between Sakharine and Haddock involving giant cranes at a shipyard dock is spectacularly clumsy and the necessary but leaden set up for the Peter Jackson helmed sequel leave a dissatisfied ending to an average adventure, and a mishandled opportunity. Decent, but for fans of the original stories, not good enough.